Europe in the 21st Century: Challenges and Opportunities

18-19 May 2012, Jean Monnet Building of the European Commission, Luxembourg 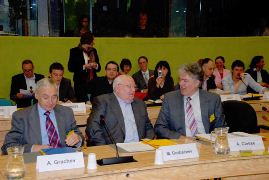 On 18 and 19 May 2012 the Luxembourg Institute for European and International Studies and the New Policy Forum (Gorbachev Forum), in cooperation with the Representation of the European Commission in Luxembourg and the think-tank Notre Europe, organised an international conference on “Europe in the 21st Century: Challenges and Opportunities”. This event was attended by about 50 participants and over 300 observers. At the opening session, the keynote speakers expressed rather divergent views on Europe’s recent political developments and options for the future.

In his speech Mikhail Gorbachev, the last President of the USSR who heads the New Policy Forum, criticised the political evolution of the European Union since the end of the Cold War. Without Russia, Gorbachev believes, the unification of Europe remains a myth. He deplored that Europe has followed the Washington Consensus instead of developing an alternative model of its own. In the current crisis that resulted from this consensus, Europe needs to invent a new societal model opposing the excessive consumption and the lack of ecological and social responsibility. 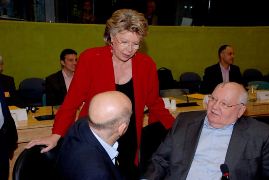 Michel Rocard criticised that when dealing with global problems like climate change, the financial crisis or nuclear arms, solutions are sought at the nation state level instead of looking for extensive international cooperation. The former Prime Minister of France expressed pessimism about Europe’s role in the world. In the current “poly-crisis”, as he puts it, Europe’s influence seems to be waning. 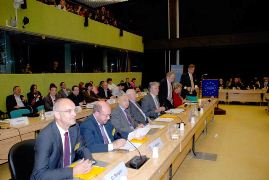 Watch the opening addresses and the panel discussions:

Panel 1: Threats to the prevailing political and socio-economic consensus 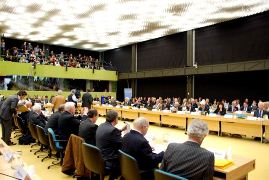 Panel 1: EU and the wider Europe

The videos are hosted by: